Continuing the trail of ransomware attack victims, now joins Tyler Technologies – a government software provider. While the service has merely hinted at a security incident, reports reveal the involvement of ransomware.

Reportedly, the US software development giant dedicated to providing services to the public sector, Tyler Technologies suffered a cyberattack.

The firm has disclosed the incident on its website that has remained down following the attack on September 23, 2020. The incident precisely affected the firm’s phone and internal IT systems causing disruption.

They then shut down their services following the incident out of caution alongside beginning with the investigations.

For now, the firm has assured that the incident did not affect any of its clients’ servers, data, or hosted systems.

Below is a copy of the security notice displayed on their website (screenshot taken while writing this article). 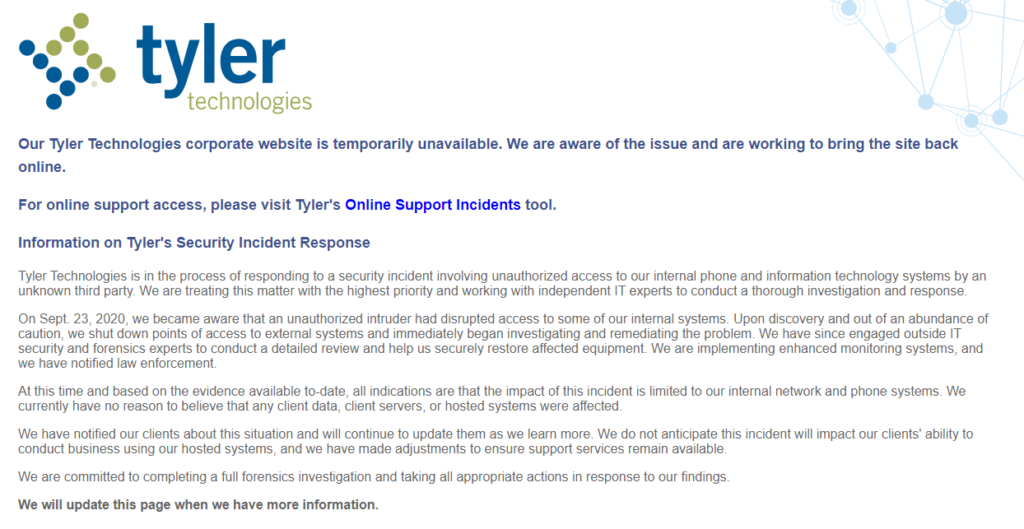 The company has revealed no more details until the time of writing this article. Nor did they confirm any timeline for their services to up again.

Tyler is aware there is a network issue affecting phones and the web site. We’re working to resolve as quickly as possible.

In the wake of this incident, the North Carolina Administrative Office of the Court (NCAOC) announced the suspension of connections with Tyler Technologies.

NCAOC immediately began work to implement security protocols, which included blocking all connections and communication systems with Tyler. NCAOC will reconnect only when written assurance is provided from Tyler that there has been no impact to North Carolina Judicial Branch systems and that it is safe for NCAOC to reconnect systems with Tyler.

While the company hasn’t revealed many details, Bleeping Computer has investigated the matter further. They reveal that the firm had suffered a ransomware attack by RansomEXX.

Cybersecurity sources familiar with the attack told BleepingComputer that Tyler Technologies suffered an attack by the RansomExx ransomware.

One local municipality employee also mentioned the same while posting on the Municipal Information Systems Association of California (MISAC) forum.

We were told this morning from one of the support techs that they got hit with ransomware early this morning on their corporate networks. Don’t have any other details at this point other than support is down until they access their systems

RansomEXX is the same ransomware that has earlier attacked the Texas Department of Transportation and Konica Minolta. Whereas its latest victims include U.S. laser developer IPG Photonics.

Disney+ accounts hacked – How to protect...