It happened to Google Takeout users.

For some reason, people trust Google and its due diligence to safely store their photos and videos and make it easily accessible whenever they want to. But, it turns out that even the world’s most high profile platform cannot be trusted blindly.

Reportedly, in November, Google did a massive blunder by sending out videos of some users to Google Takeout archives of complete strangers. Later, the company sent emails to the affected users informing them that for a short duration some of their backed-up videos were mistakenly sent to strangers’ archives.

The news went viral after a Twitter user and Duo Security’s CTO Jon Oberheide shared an email sent to him by Google regarding this issue. The email did not specifically state that the company made a security blunder but we can get hints of a privacy breach from the email’s content. 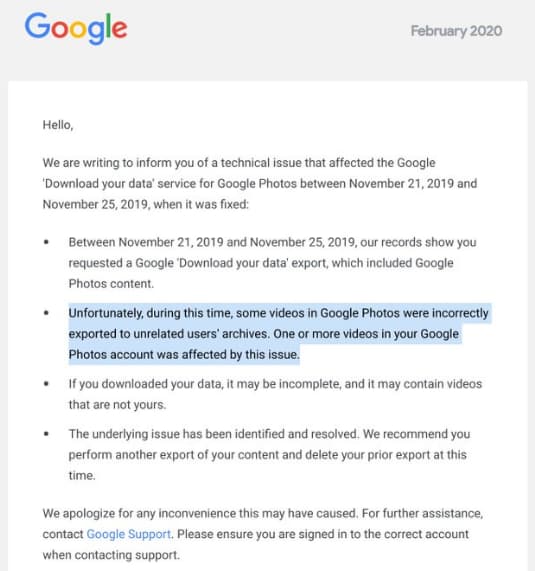 To be clear, this is a big screw-up. I hope the number of affected parties is small, but the impact on those parties could be high…and very unsettling. But my real beef is with this nonchalant and non-specific notification email. Hopefully, Google follows up with more comms, tweeted Jon.

It is, however, clearly stated that users who exported their pictures or videos between 21 Nov and 25 Nov, 2019 via Google Takeout, the company’s official download your data service are affected by this issue.

“One or more videos in your Google Photos account was affected by this issue,” Google wrote in the email.

When Jon emailed Google about the list of impacted videos Google denied to provide further details. But confirmed that some of the stored videos were swapped and accidentally sent to the wrong archives.

Furthermore, Google apologized to the affected users for the technical glitch leading to sharing their private videos with unrelated users. It has clarified that the issue only occurred in videos and if someone did download the wrongly shared data, it would be incomplete.

The company claims to have resolved the issue:

“We fixed the underlying issue and have conducted an in-depth analysis to help prevent this from ever happening again. We are very sorry this happened,” said Google’s representative.